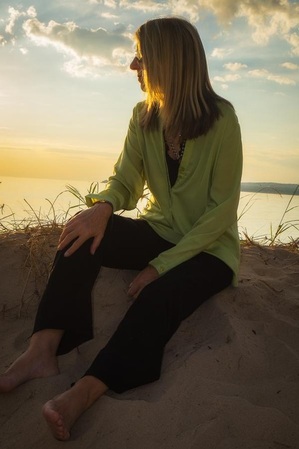 The Sign of Scorpio (you may also relate to this if you have the Moon in Scorpio or Scorpio Rising).

If you were born between October 24 and November 22, you are Scorpio. You have two ruling planets – assertive Mars and transformative Pluto. Scorpio is one of the four Fixed Signs and the other three are Taurus, Leo and Aquarius. Because of this you are determined and reliable with a strong will. Your element is Water, like Cancer and Pisces, but yours is like the water of a deep, still, reflective pool – difficult to penetrate to the depths. You have a strong, intense feeling nature.

So what’s the Sign of Scorpio really all about?  When you read the astrology books you see the words: death, sex and inheritance.  Well, you can get the connection between death and inheritance, but where does sex come in?  Well, just ask a Scorpio …! Even so, there’s a lot more to the sign than this. Like the other water signs – Cancer and Pisces - Scorpio is innately psychic, even if he doesn’t know it or admit it. At worst he is a lost soul, wandering aimlessly through life, wasting his talents through sexual and emotional excess. At best he is a healer and mystic, penetrating the secrets of life and death and worlds beyond this one; probing perceptively into your innermost fears and desires and bringing light to the darkness of our world.

Usually, he’s a bit of both. A friend has the Sun in Scorpio with a Scorpio ascendant and he is a bundle of extremes. A black belt martial artist, he delights in showing off his injuries and explaining in graphic details how he almost killed his opponent. In almost the next breath he will tell you, in a hushed, reverent tone, how he had just come from the hospital where he had been giving Spiritual healing to a six-month old baby.

So, although he may be pale, spotty and curiously innocent-looking, a typical Scorpio has a strong physique with defined features and eyebrows, penetrating eyes and a prominent nose. Whatever a Scorpio looks like you will feel his magnetism, crackling like electricity and sense his hidden depths. You may have witnessed first-hand the intensity of feelings beneath his placid exterior. This is not the mirrored pool of the Cancer, or the tinkling stream of the Pisces, this is deep, and often muddy water. Just as it is difficult to fathom the depths of a muddy pond, so is it hard to fathom the depths of the Scorpio.

He rather likes being mysterious and has the personality of an undercover agent. He certainly will not tolerate others trying to understand him. With his intense, strong-willed nature, he can fool even the most experienced psychoanalyst, should he ever get that far, which is doubtful. The truth is he doesn’t care too much if he has phobias and complexes. He rather enjoys them. It usually takes a good number of personal tragedies before he’ll attempt the dangerous inner path. But when he does, watch out, he can rise like the phoenix from the ashes of his former self.

You are attracted to crisis and it is here that your true strength is revealed. You feel most alive in life and death situations, such as saving lives as a doctor or healer, or risking your own life in adventurous pursuits. You feel at home seeking out dangerous situations or companions and somewhere in your life you like to feel you are on the edge. If you don’t have a life of crisis, you may seek it out through relationships or in other ways and while others may see this as a self-destructive urge, there is a side of you that would almost rather feel pain than nothing at all. Life is not about watching the world go by for you; you want to be fully immersed in it. A lesson for you, therefore, is to seek the depths of life whether that is in the physical, emotional or psychic planes of life.

Because you understand pain and suffering yourself, you have great compassion for those who suffer and are rather scornful of people with superficial lives who seem to skate on the surface never experiencing very much. You instinctively know that there is a dark underside for every light surface. Understanding this shadowy side of life is a key to fulfilling your life purpose.